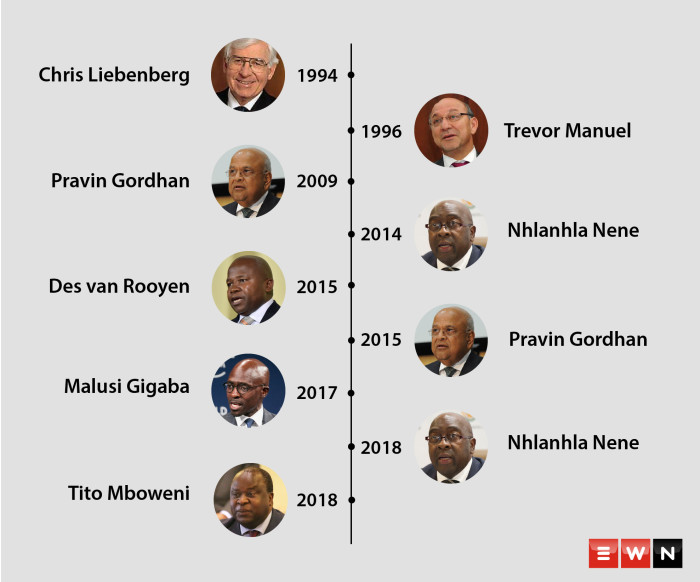 An inquiry concluded there was no malicious intent on his part, but still – millions in union pension money was lost.

Incoming Finance Minister Enoch Godongwana has a R100-million cloud hovering over his head, one he hasn’t been able to shake for over a decade and it has grown more conspicuous overnight after his elevation to the country’s top economic job in a late-night Cabinet change-up by President Cyril Ramaphosa on 5 August.

In 2012, Godongwana quit his job as Deputy Minister of Economic Development. More than 20,000 clothing workers, belonging to the South African Clothing and Textile Workers’ Union (Sactwu), risked losing a big chunk of their pensions after it entered into a R100-million agreement with Canyon Springs Investments, a company 50% owned by Godongwana and his wife Thandiwe through a trust.

Canyon took at least R120-million from the Sactwu pension pot and loaned it to an investment vehicle controlled by former Sactwu trade unionist Richard Kawie, whom Godongwana has admitted was a friend of his, with the hope of making a profit that would partly be pumped back into the pension fund, but that was never to be. The investment vehicle collapsed, and Kawie was subsequently arrested by the Hawks. Kawie denied the charges.

A liquidation inquiry paid for by the union after the money evaporated, as reported by the Mail & Guardian, found that Godongwana and his wife “were party to the carrying on of the business of the company, either fraudulently or at least recklessly”.

It was reported, then, that between 2007 and 2009, Godongwana had received salary payments from Canyon Springs, ostensibly the proceeds of the bad deal, amounting to about R1.5-million. Godongwana reportedly told the inquiry that he had entered the business [Canyon] in “good faith” and had not known it was a scheme. According to the inquiry, the union provident fund had been misled into putting money in an investment vehicle ultimately controlled by Canyon. The inquiry report notes that Godongwana admitted that in hindsight he had not properly exercised his fiduciary duties as a director.

Sactwu Secretary General Andre Kriel told DM168 that Godongwana had fully cooperated with the investigation into the matter, which was concluded in 2017.

“In January 2017 we reached a written settlement agreement with him. He has fully honoured the terms of the settlement. In particular,  he has paid back the total amount which we had claimed from him, with interest,” Kriel said.

Kriel said he did not believe that Godongwana had intentionally siphoned any money out of the workers’ pension fund.

“During the 417 Inquiry into Canyon Springs and based on its outcomes, our legal council concluded that there was no malicious intent by him. It became clear that there were others who were the main drivers of the corruption,” Kriel said. The matter raised eyebrows in the immediate aftermath of Godongwana’s appointment, with South Africans wary of another scandal-tinged leader taking office following Health Minister Zweli Mkhize’s seemingly forced resignation triggered by the Digital Vibes affair, one in a litany of graft allegations against government officials.

A former colleague of Godongwana’s, who asked not to be named, said he was a capable politician, and that his trade union, academic training as an economist, and government background put him in a good position to deal with the economic crisis.

“The pension fund stuff could be seen as bad judgement and not corruption, in that he probably did not expect the businesses to go broke. But still,” the person said.

Now as finance minister, Godongwana will have to earn the trust of the public at a time when Covid-19 has deepened unemployment and inequality, eating away at the roots of the uneasy detente between government and the majority of society that remains mired in poverty.

“It’s hard to say if he’ll be a good finance minister,” said Xhanti Payi, an economist and director at Nascence Advisory. “He has enormous experience in policy analysis and policy making. Also, I’ve seen him interact with investors, including my own clients, and he inspires a lot of confidence.” DM168