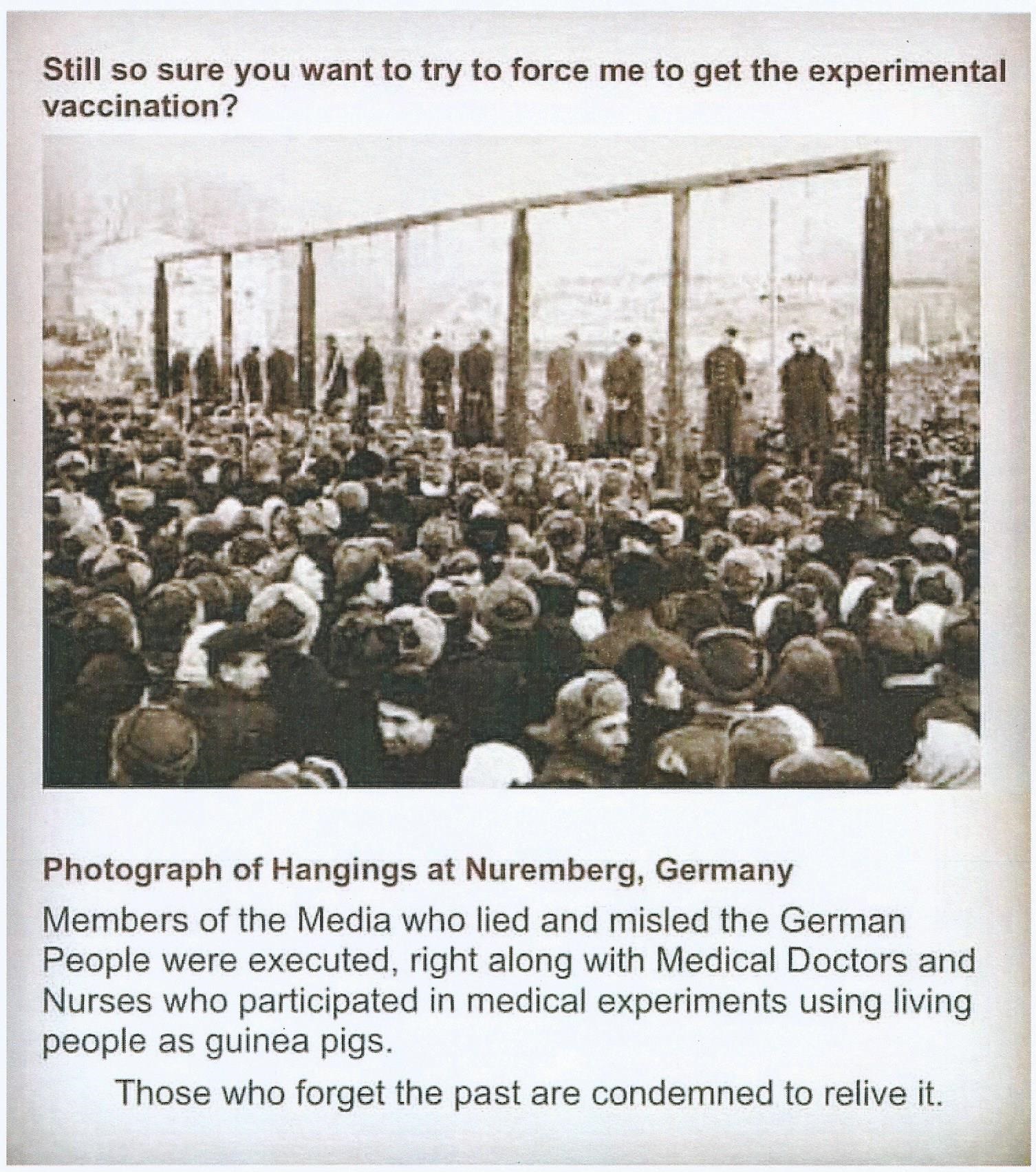 From Wikipedia, the free encyclopedia

The Nuremberg trials were a series of military tribunals held after World War II by the Allied forces under international law and the laws of war. The trials were most notable for the prosecution of prominent members of the political, military, judicial, and economic leadership of Nazi Germany, who planned, carried out, or otherwise participated in the Holocaust and other war crimes. en.wikipedia.org

The Nuremberg executions took place on 16 October 1946, shortly after the conclusion of the Nuremberg Trials. Ten prominent members of the political and military leadership of Nazi Germany were executed by hanging: Hans Frank, Wilhelm Frick, Alfred Jodl, Ernst Kaltenbrunner, Wilhelm Keitel, Joachim von Ribbentrop, Alfred Rosenberg, Fritz Sauckel, Arthur Seyss-Inquart, and Julius Streicher. Hermann Göring was also scheduled to be hanged on that day, but committed suicide using a potassium cyanide capsule the night before. Martin Bormann was also sentenced to death in absentia, but reportedly had committed suicide while attempting to escape Berlin on 2 May 1945.

The sentences were carried out in the gymnasium of Nuremberg Prison by the United States Army using the standard drop method instead of long drop.

The executioners were Master Sergeant John C. Woods and his assistant, military policeman Joseph Malta. Woods may have miscalculated the lengths for the ropes used for the executions, such that some of the men did not die quickly of an intended broken neck but instead strangled to death slowly.

Some reports indicated some executions took from 14 to 28 minutes. The Army denied claims that the drop length was too short or that the condemned died from strangulation instead of a broken neck. Additionally, the trapdoor was too small, such that several of the condemned suffered bleeding head injuries when they hit the sides of the trapdoor while dropping through.

The bodies were rumored to have been taken to Dachau for cremation, but were instead incinerated in a crematorium in Munich and the ashes scattered over the river Isar.

Kingsbury Smith of the International News Service wrote an eyewitness account of a reporter watching the hangings. His account appeared with photos in newspapers.

The executions started at 1:11 a.m with von Ribbentrop entering the execution chamber first. The total span was just about two hours.

One of the ten, Ribbentrop, was asked if he had any final words. He said: "God protect Germany. God have mercy on my soul. My final wish is that Germany should recover her unity and that, for the sake of peace, there should be an understanding between East and West. I wish peace to the world." Nuremberg Prison Commandant Burton C. Andrus later recalled that Ribbentrop turned to the prison's Lutheran chaplain, Henry F. Gerecke, immediately before the hood was placed over his head and whispered, "I'll see you again."

The body of Joachim von Ribbentrop

The body of Wilhelm Keitel

The body of Ernst Kaltenbrunner

The body of Alfred Rosenberg

The body of Hans Frank

The body of Wilhelm Frick

The body of Julius Streicher

The body of Fritz Sauckel

The body of Alfred Jodl

The body of Arthur Seyss-Inquart

Martin Bormann was sentenced to death in absentia.

President Cyril Ramaphosa says that South Africa is now in the midst of a third wave of Covid-19 infections, and has warned that every citizen will need to do their part to help limit the toll – including adhering to lockdown regulations, and even going beyond the gazetted requirements if they can.

Writing in his weekly open letter to the public, Ramaphosa said that when the virus surges to this extent, the economy also faces challenges.

“Workers have to isolate or quarantine, people stop going out for recreation or shopping, tourism comes to a standstill, and workplaces have to spend more money to prevent infections.”

However, the president said it was incorrect to speak about a trade-off between lives and livelihoods.

“Rather, we need to invest our time, effort and resources to control the pandemic to see a payoff, in terms of both falling case numbers, reduced deaths and economic recovery.

“The climb in new cases has been extraordinarily rapid and steep over the past few weeks. The number of daily new cases jumped from below 800 in early April to over 13,000 in the past week. In other words, it increased more than fifteen-fold from the last low point.”

What we need to do

Ramaphosa said that South Africans all know what they have to do to bring the rate of infection down, and the country must act with great discipline to protect its people and livelihoods.

“Once again, we have to avoid social gatherings of all kinds, whether for family, friends, business or recreation. We must work from home if we can.

“We must wear masks when other people are around and stay one and a half metres from other people whenever possible. Although we find ourselves in the middle of winter, we need to ensure good ventilation when indoors or in public transport, for instance by opening windows.”

He added that it was not only the task of the vulnerable or the healthcare sector to control the virus but requires every South African to do their part, to accept that the country cannot go back to pre-pandemic days but must rather build a new normal that is safe for everyone.

Ramaphosa said that Gauteng is currently the hardest-hit province, and this week the number of new cases exceeded the peak in both previous waves, and it has not started to decline yet.

As a result, hospitals are reaching capacity, and healthcare workers are exhausted, he said.

“Gauteng looks small on the map. But it is home to one in five South Africans and two-fifths of our economy. As an economic hub, many people travel to and from this province. We need to turn this around urgently, or lives and livelihoods will be seriously under threat.”

The president said that government plans to provide vaccinations for the vast majority of adults in South Africa by the end of the year.

“It is crucial that, when you become eligible, you get the jab as soon as possible. Our priority in this phase is to vaccinate all five million people over the age of 60.

“This week, we also plan to start vaccinating half a million educators and others in the sector since their work requires social contact and is vital for our children, our economy and our future,” he said.

Ramaphosa said that South Africans should also play their part in ensuring the fast and smooth rollout of the vaccine campaign.

“If our family members, friends, neighbours or employees need help, we should support them in registering and getting to vaccine sites. We will only be able to effectively contain this disease when we succeed in rolling out vaccinations on a large scale.

“Our country has experienced many hardships in the past. However, we overcame them by understanding the challenges we faced, developing appropriate strategies, and implementing them together. (Goeie raad vir die Afrikanervolk. beklemtoning van die AVP)

“As we have done before, we need to work as one to prevent infections and reduce the effects of this virus on us.”