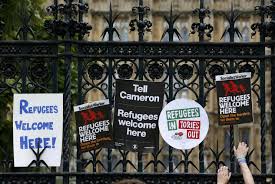 Griff Witte/The Washington PostA memorial to Arkadiusz Jóźwik, a 40-year-old Polish immigrant who was killed in Harlow, England, in August. Police are investigating the death as a possible hate crime.

HARLOW, England — He went down with a single punch.

Arkadiusz Jóźwik — shy, devoted to his mother and an immigrant to Britain from his native Poland — was out with friends late last month enjoying pizza and drinks when they were set upon by a group of teens, some reportedly shouting anti-Polish slurs.

The punch knocked Jóźwik to the ground, the back of his head slapping the concrete of the rundown pedestrian plaza in this hardscrabble London suburb. The 40-year-old was taken off of life support days later.

Now Jóźwik’s violent death is reverberating throughout Britain, and across Europe, as the latest evidence of a post-Brexit surge in suspected hate crimes directed at immigrants.

When anti-immigrant assaults first started rising after the June 23 vote to leave the European Union, authorities expressed hope that the spike would prove temporary.

But nearly three months later, the rate of such crimes remains sharply higher than it was last year, generating fears that the xenophobic passions unleashed by the Brexit vote have created a new normal of fear and intimidation for the country’s approximately 8.5 million foreign-born residents.

It may get worse: Those who backed Brexit, expecting the vote to leave the European Union would yield mass deportations and a ban on new immigrant arrivals, are bound to be disappointed by the years-long bureaucratic slog that lies ahead, which could lead to even more violence as frustration sets in.

Eric Hind, a Polish-born friend of Jóźwik’s, said the day after the vote that he received messages on Facebook: “What time is the next bus back to Poland?” His mother and his sister were told by their factory manager that “now you Poles need to pack up your bags and go back home.”

The vote mandated no such thing. But the threat of violence may force them out just the same.

Such is the depth of concern that the Polish national police sent two officers to Harlow last week to patrol the town, which was largely built in the 1950s as a concrete-clad socialist utopia for London residents who were bombed out during the Blitz.

In more recent decades, Harlow has struggled with closed factories and wide income disparities, even as immigrants have moved in to launch businesses and get a foothold in their new land.

“A lot of people here feel like they’ve been left behind. Britain’s moving on at a huge pace, but their situation is getting worse and worse,” said Owen Jones, senior organizer for the anti-extremism group Hope Not Hate. “Then they see immigrants driving around in nicer cars and living better lives than they do. It creates even more resentment.”

In the pedestrian plaza where Jóźwik died — its storefronts dominated by liquor shops, betting parlors and faded pubs — officers with “Policja” stamped on their blue uniforms are walking the beat alongside those bearing the more familiar bulbous black caps of a British bobby.

The Polish officers have no formal police powers in Britain. But their highly unusual assignment was intended to help “engage with members of the Polish community who do not speak English as their first language,”