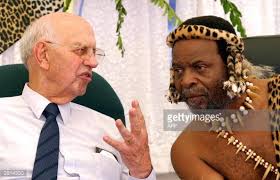 The official king of South Africa’s Zulu tribe has announced that that country was economically, militarily, and socially better under white Afrikaner rule—and that history will judge blacks as only having destroyed everything that they had inherited from the white government.

King Goodwill Zwelithini, who has been Zulu king since December 1971, made the remarks during a speech at an official royal household event in Nongoma, located in the northeastern part of the eastern seaboard province of KwaZulu-Natal, over the past weekend.

The event, held to mark his forty-fourth year on the Zulu throne, was reported on by the Natal Mercury newspaper.

King Zwelithini said the former white rulers of South Africa had “built a powerful government with the strongest economy and army on the continent.” He went on to say that the white government had “a mighty army, and that the South African currency and economy had shot up” under the National Party government. “But then,” he continued, “came this so-called democracy in which black people are destroying the gains of the past. The economy that we are now burning down.”

Addressing himself directly to black people, King Zwelethini said that “you do not want to build on what you had inherited. You are going to find yourselves on the wrong side of history.” “History will judge black people harshly as they have failed to build on the successes of the Afrikaners,” he said, before continuing to explain that “black people loved to use matches to burn down infrastructure” built by the white government.

Below: Three photographs taken on December 7, in Johannesburg, South Africa. The country’s largest city is in the midst of a municipal workers’ strike, and part of their “protest” action consists of throwing the city’s trash into the streets.

King Zwelithini said that “people on the ground did not appreciate the infrastructure” which they had inherited from the white rulers, even though the ANC leaders themselves governed from the very buildings which the whites had created.

Referring specifically to the Union Buildings in Pretoria and the South African Parliament in Cape Town, King Zwelithini said that he was “surprised that all presidents who have been elected in this so-called democracy, occupy apartheid buildings.”

“But you on the ground, are burning everything that you found here. . . you don’t want to use them (buildings), you say this is apartheid infrastructure,” he said.

He also mentioned that at one of his palaces in Nongoma, he still had all the medals which the white government had awarded to his “kingdom,” marking out historical events and achievements of the Zulu people.

King Zwelithini’s comments come after a falling out with the ANC government—which he previously supported—over the reorganization and funding of his royal household.

JOHANNESBURG - The Zulu royal house has backtracked on comments made by King Goodwill Zwelithini at a cattle auction sale in KwaZulu-Natal over the weekend.

The Mercury reported that King Zwelithini said the National Party had built a government with a strong economy and army, but this was destroyed by black people who reversed the gains of the apartheid government. But the royal house’s Prince Thulani Zulu now says the king was only speaking about farming and how it was taught during that era. Zulu said the king lived through the apartheid era and because he spoke at a cattle auction, he mentioned how the previous regime trained farmers.  Prince Zulu said the king’s subjects should learn how to farm from others. “He was encouraging people to follow suit, to humble themselves and learn from anybody who knows [how to farm].” This year, the Human Rights Commission also cleared King Zwelithini from any wrongdoing after he was accused of inciting xenophobic violence. ATTEMPTS TO DESTROY ROYAL HOUSE

The Zulu royal house says the claims that King Zwelithini has defended apartheid are disrespectful attempts to destroy the nation. Zulu says they don’t want to justify claims that the king believes the current government is undoing good work done by the apartheid regime. “I actually don’t want to associate the king or myself with that because the king was talking in the context of farming and not on any other thing.” He says the reports on the king’s comments forms part of attempts to destroy the Zulu house. “This is disrespectful to the king and it shows that people do not understand what royalty is. I know they are trying whatever they can to destroy the royalty, but we know our king is a symbol of unity.”