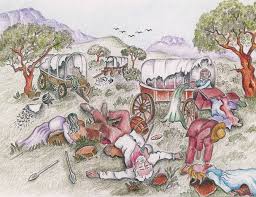 I hope you slept well. I didn't. Last night I woke up at 23h50. Ten to midnight. I don't know why, but suddenly I just couldn't sleep anymore. I decided to read a book, but the book that I wanted I could not find in my bookshelf. As I searched, a small Afrikans book that I got as a gift about four years ago, but that I have never read, fell out of the shelf. 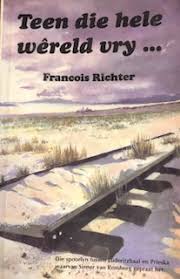 The title, literally meaning, "Against the whole world free", obviously comes from the forth verse of the former national anthem of the Republic of South Africa "Die Stem van Suid Afrika" (The voice of SA) , a poem by C.J. Langenhoven about the beauty of South Africa and the history of our people who tamed it. The forth verse is a prayer asking God to help us to remember our heritage and teach it to our children. It ends with a promise that if we do that, it will be well with SA, because God reigns.

What is so peculiar is that the book fell open on page 104,105 and when I picked it up, I recognised the sub title on page 105, "Bloukrans" and the first sentence that starts with, "In the unholy night of 16 February 1838"

I was stunned. Although I was at the Voortrekker monument six weeks ago with one of our readers, J.P. Viljoen and we looked at the relief works, I forgot about the Massacre at Bloukrans

Did God wake me up ten to midnight, to remind me of what happened at Bloukrans, to tell me to remind others in South Africa that it might be ten to midnight for them and the same fate is about to befall them?

It certainly was a strange, strange case, that I cannot explain. I mean I am not actually religious.

Nevertheless, you can read the entire bitter and sad history of The unholy night of 17 February 1838 at Bloukrans here:

When you remember how well you slept last night, also remember what those pioneer Voortrekkers went through that night. Among the Voortrekkers, 41 men, 56 women and 185 children were killed. In addition another 250 coloured and Sotho servants that accompanied the Voortrekkers were brutally killed, bringing the casualties to about 534.

It was just horendous. Pregnant women gang raped and their wombs cut open, little babies taken by their feet and their heads smashed against the sides of the wagon wheels, the twelve year old Joanna van der Merwe was stabbed 21 times with an assegai, but survived.â€¦On top of it 25,000 heads of cattle and hundreds of sheep were stolen.

Afterwards the Voortrekkers founded the town of “Weenen” (meaning weeping) there. The Afrikaans poet D.F. Malherbe wrote a poem called "Middernag" about it.

Today we and our children are told by the descendants of these Satanic and murderous blacks about supposed Apartheid atrocities and massacres, despite not a single mass grave that could ever be found. We are told that we stole the wealth of the blacks. Some even have the audacity to demand apologies and reparations!

They want any apology? They go first. Without that, there can never be any reconciliation. We will NEVER forget Bloukrans, Moordspruit and every single white person that you have murdered in South Africa. In fact we are preparing so that it never happens to us again. We are preparing for the next Blood River.