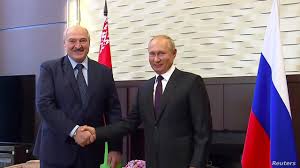 I’m going to go back to WebEx and I see that Matthew Lee is on the -- on the line. Matthew, are you connecting?

QUESTIONER: Sure, can you hear me?

MR. RICE: Not only hear you but see you. Welcome.

QUESTIONER: Okay, great. Thanks a lot. It’s a big technological advance. I want to ask you a couple of questions about -- about COVID-19 and -- and IMF. One is a pretty, you might knock it out of the park -- the President of Belarus, Lukashenko had said, has been quoted that the IMF tried to “bribe him to impose a lockdown by offering COVID relief funds” which was in Delta (phonetic) the telegraph has taken the media of Belarus. So I wanted to know what your understanding, what your response would be to those who would say that offering the aid is is trying to strongarm governments into taking the pandemic more seriously. And then I also wondered about corruption. It’s been -- there’s been investigation in Kenya about how supplies are being purchased and -- and distributed. And there’s some similar issues in Cameroon and Honduras and I just -- I wanted to follow up on countries you previously gave relief, just to know how active is the IMF in monitoring or in keeping its finger on the pulse of -- of corruption issues in some countries that arise in terms of the response to COVID-19 with IMF helps? Thanks a lot.

MR. RICE: Thank you very much for those questions, Matthew. On Belarus, what I can tell you is that in March, Belarus approached the Fund with a request to discuss possible emergency assistance, but no agreement was reached, and we have not found a way to bridge significant differences about the appropriate response to the present challenges. The Rapid Financing Instrument, which is our emergency -- one of our emergency financing mechanisms, does not carry hard conditionalities that I explained at the top of the briefing, but assurances of transparency and appropriate policy actions are required to ensure that the funds are used to address the pandemic and to facilitate economic stabilities. We’re actually getting into your next question a bit there, Matthew. But still on Belarus, I I can tell you, we did not demand quarantine, isolation, lockdown, but we sought assurances for steps to contain the pandemic in line with WHO recommendations, which is our standard operating procedure in all countries. So, just the same.

On your broader question, Matthew, and thank you for -- again for asking it, I mentioned at the top of the meeting that the -- the governance and -- the good governance and the anticorruption dimension of our emergency financing is a very important component of our efforts, so if you take a look at the Lending Tracker that I mentioned, you’ll see that we are now, and this -- this is an upgrade, an improvement in our website over the summer, you’ll find there that we are listing the measures that governments have committed to undertake in this sphere as a means of literally helping to track them. It's the -- the Lending Tracker. I won’t get into individual countries here, Matthew, but I will say that you will find the -- the kinds of actions, measures that we are calling for are audits of -- of procurement. We are asking for clear publication online. And you know, more broadly, you may have heard Kristalina Georgieva talked about used this phrase you know, “spend the money that’s needed to protect lives and livelihoods, but keep the receipts.” Meaning, we want to track how that money has been spent and we will be looking at that ex=post. But in the here and now we’re looking for commitments to audits and online procurement, and indeed I think the whole move to online and digital can really help us in this regard. So let me -- let me leave it there.

Matthew, thanks and thanks to your colleague who I see in the background, your younger colleague. (laughter) I take it that’s your son. You -- you’re training him early up there in New York.

QUESTIONER: Absolutely. I find that the UN is a particular focus.

MR. RICE: Good. Nice to see you, Matthew. Thanks for the questions.

Matt Lee — an independent journalist who covers the United Nations — was forcibly removed by security from the UN headquarters in New York City on July 3, 2018. The UN’s Media Accreditation and Liaison Unit (MALU) later withdrew his press credentials, denying him access to the UN building.

But on Feb. 19, 2016, Lee’s press accreditation was downgraded from “resident correspondent” to “non-resident correspondent” after he livestreamed a private meeting of the United Nations Correspondents Association (UNCA). There is no love lost between Lee and UNCA. Lee joined UNCA shortly after he began covering the UN in 2005, but left the association on bad terms in 2012 after reporting on a potential conflict of interest involving UNCA’s then-president.