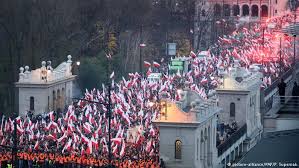 PRAGUE, Czech Republic — Recently, a group of 20 people gathered at a shady corner outside the Saudi Arabian Embassy in the Czech capital, preparing to stage a particularly controversial brand of protest.

Several in the group wrapped scarves and pillowcases around their heads in mockery of the traditional Muslim headdress, the keffiyeh. Others put on sheets like the ankle-length garment the thawb, securing them with a pin, printed on which was a red cross through a mosque with the words "Block Islamization." The group rolled out a portable toilet meant to resemble the Holy Kaaba at Mecca and the costumed protesters began to march around it to mock the Hajj pilgrimage before police shut demonstration down.

"We have the right of freedom of speech," Martin Vítek, one of the leaders of the group, said at the time. "Islam is not a religion; it is an ideology for governing the world."

Concerns About Muslims Echo Across Europe

Though small in size, the group is one expression of far bigger nationalist movements sweeping across Europe, from countries like France and the Netherlands, to the heart of Central Europe, in the Czech Republic, Austria, Poland and Hungary. The anti-Muslim mood, anchored to recent terrorist activities in France, Germany and Belgium, is part of a call for change across the region. Right-wing leaders are capitalizing on fear and xenophobia to flatly reject incoming Muslim refugees primarily fleeing Syria, Afghanistan and Iraq.

"What you have here is a perfect storm resulting from the financial crisis in the West, the security crisis and the refugee crisis," says Mabel Berezin, an expert in nationalism in Europe and a sociologist at the department of sociology at Cornell University.

According to a study by the Pew Research Center published in July, 43 percent of the surveyed populations of 10 countries had an unfavorable view of Muslims. Another 59 percent said they believe accepting refugees increases the likelihood of terrorism. The 10 countries included France, Germany, Greece, Hungary, Italy, the Netherlands, Poland, Spain, Sweden and the United Kingdom.

France wrestles with its Muslim relations]

In the Czech Republic, which is holding senate elections in October and general legislative elections next year, nationalistic and anti-Islamic rhetoric has become commonplace, even among top leaders. "After what has been happening in Europe, I say clearly that I don't want even a single refugee in the Czech Republic, not even temporarily," Deputy Prime Minister Andrej Babis wrote in an op-ed in August. President Milos Zeman encouraged citizens to "arm themselves" against the rising terrorist threat.

The mood today in Central Europe harkens back to centuries-long antipathy toward another group, the Romani, a minority originating from northern India believed to have first arrived in Europe in the 15th century. This group, disparagingly referred to by locals as "gypsies," have for decades been the victims of hate crimes in countries like Hungary and the Czech Republic that are often met with violence. During World War II, up to half a million Romani were believed to have been executed by the Nazis in what has become known as the Romani Holocaust.

The shift toward nationalism in Central Europe is perhaps no more apparent than in Hungary and Poland, where anti-migrant leaders hold top positions in the government and have pledged to bar migrants from entering. Both countries have become the subject of numerous protests over the issue and have experienced a sharp increase in hate crimes.

Gloomy Autumn in Store for Europe]

The July Pew study also showed Hungarians possessed the strongest negative views about Muslims, closely followed by Italians and Poles. Additionally, 82 percent of Hungarians and 75 percent of Poles view refugees as a burden on a country by taking jobs and benefits that otherwise would have been available to citizens.

Hungarian President Viktor Orban has consistently rejected efforts by the European Union to manage the migrant crisis through resettlement quotas. He has called on the EU to round up migrants and put them on an island, according to European media reports. On Oct. 2 his country will vote on a Brexit-inspired referendum on whether to accept the proposed EU refugee quotas.

Cornell's Berezin says anti-migrant views in Central Europe are largely reactionary since most of the countries in the region have very small Muslim populations. By contrast, "In a place like France that has experienced terrorist threats, it is not surprising that people are worried about terrorism, because it actually happened."

Roughly 1.3 million migrants arrived in the 28 EU member states, Norway and Switzerland in 2015, nearly double the previous record of about 700,000 recorded in 1992 following the collapse of the Soviet Union, according to Pew.

Hungary last year began installing razor-wire fencing along its border with Serbia. In the run-up to the Oct. 2 referendum, Orban's government distributed pamphlets to the public warning that immigrants had turned sections of London and other European cities into "no-go" zones. The Orban government's position on immigration has drawn scorn from regional leaders. In September, Luxembourg's foreign minister, Jean Asselborn, called for Hungary to be thrown out of the EU for treating asylum seekers "worse than wild animals."

The issue of nationalism in Central Europe has been fueled not only by the migration crisis, but by some influential member-states of the EU reacting to a variety of political and economic issues that have been accumulating gradually over several years.

These issues include "the nature of EU responses to the Ukraine-Russia conflict and by a general feeling that the 'new' member states of central Europe still do not get a fair hearing within the EU," says Richard Youngs, a senior associate at Brussels-based think tank Carnegie Europe who is an expert on EU foreign policy. Youngs and Berezin point to badly needed reforms on the part of the European Union if the issue is going to be dealt with.

"If there are certain social values that appear more conservative in some of the eastern member states, the EU will need to be flexible enough to allow these some room, before such values tip over into really serious illiberal politics as in Hungary and increasingly in Poland, too," says Youngs.

It does not seem that any such reform is forthcoming however as the de facto leader of the EU, German Chancellor Angela Merkel, has shown signs of waning power after her party only drew about 18 percent of the vote in Berlin elections earlier this month. The loss has given rise to anti-immigration populists Alternative für Deutschland, described by Berlin mayor Michael Müller days before the election as "a sign of the return of the right wing and the Nazis in Germany."

Without a powerful voice at the helm of the EU, however, it appears there is little left to stand in the way of the rising tide of nationalism and anti-Muslim sentiments.

"You have party leaders who are fueling these [nationalist] sentiments by omission really, by failing to stand out against these issues," says Lydia Gall, a Europe researcher and human rights lawyer with Human Rights Watch in Hungary.

"I think it's one of the most important issues presently and will be for some time, and as far as I can see right now the European Union is failing."

Philip Heijmans is a journalist based in Prague, Czech Republic.