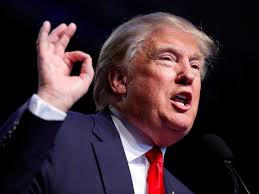 DIVIDED STATES OF TRUMP: BEARING WITNESS TO A NEW AXIS OF EVIL

Eight years ago, a family walked out into the crisp November night in Chicago and the world exulted. President Barack Obama, with his wife Michelle and daughters Sasha and Malia at his side, said the following: "If there is anyone out there who still doubts that America is a place where all things are possible… tonight is your answer." On Tuesday night, a ghastly new reality became possible. A chauvinistic buffoon was elected to be the 45th president of 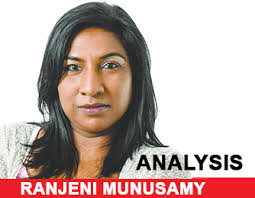 the United States, therefore becoming the most powerful leader in the world. RANJENI MUNUSAMY reports from the US capital Washington on the biggest political upset in modern history.

"Are there lions where you come from?", nine-year-old Keira Whiss asked me. The sweet, blonde-haired child and her family were among thousands of people in an airport hangar outside Pittsburgh on Sunday eagerly waiting to see Donald Trump. Her mother Wendy told me that it was Keira who insisted they come and had booked the tickets for the rally online.

They had driven two hours to come to Pittsburgh and waited seven hours to hear Trump speak. Keira wore a pink "Make America Great Again" T-shirt and had several badges with Trump's face and one that said "Adorable Deplorable" – a proud claim to the "deplorable" label Hillary Clinton had assigned to some of Trump's supporters. Keira loved Trump so much that she wanted to go with her parents to the polling station on Tuesday after school to make sure they voted for her hero.

Apart from Trump, Keira also has a fascination for wild animals. Someone close to me had just been to the Kruger National Park so I showed Keira his pictures on my phone of a lion, leopard and elephant. She was thrilled.

"Are you allowed to touch them," she asked, bright-eyed. "No," I said. "You cannot get too close because they will hurt you."

The words echoed in my head as I said it. I was among 9,000 people who terrified me. I had ventured into their space – a "big family reunion" as one of their congressmen called it – to try to understand this massive Trump movement that millions of Americans like Keira and her parents were now part of.

I could not understand it. At that event and at another rally addressed by Trump's running mate Mike Pence a few days earlier, I realised that this movement was at war with everything that I am. A black person. A woman. A journalist. A foreigner.

From the moment I arrived at the Trump rally, their hatred was palpable. I heard taunts about "the liberal media" and threats about "locking our borders". At one point, I locked eyes with a boy who had painted his upper body blue, white and red and was parading around shouting insults about immigrants and journalists. I sat down in the media pen and for almost an hour, I did not move. I had been warned and had read about many attacks on journalists at Trump rallies. Still, I was not prepared for this level of resentment. I learnt later from another journalist that the boy in the body paint was 16.

I thought about Keira and the boy in the body paint as Trump's decisive victory steadily turned the electoral map red on Tuesday night. I thought about their joy and their hopes for the future. Their vision of the future under a Trump presidency would be very different from other people I had encountered. A young woman who had crossed the desert from Mexico as a child and had recently attained citizenship. Another young woman who was five months pregnant and hoped for equal pay and childcare for her unborn child. An elderly security guard who said Trump was "as bat-shit crazy as George W Bush". A young gay doctor who thought he would be a witness to history when the first woman became president.

The reason for the election outcome, for the mass rebellion from the American electorate, is complex and layered. People cannot be arranged into neat categories with predictive beliefs and voting patterns. That is why so many of us got it so horribly wrong.

There are millions of people who are frustrated and angry that the America of the past, where white people thrived and took precedence over others, no longer exists. We underestimated how strongly that sentiment would influence the vote. There are millions who simply want change and a shattering of the establishment, even if it is through the shambolic, unclear vision of Trump.

Others were motivated by religious beliefs or sexism not to vote for Clinton. America was not ready for a woman leader, particularly one that was so substantially flawed. She was too compromised, took too much for granted and clearly did not understand the mood of the nation she wanted to lead. Many people hate Bill Clinton and his behaviour during his term of office. They see Hillary as his enabler and an extension of who he is. The establishment Clinton relied on to carry her to the White House and values she thought was most prevalent in US society was precisely what was being rejected. And most of all, Clinton was not trusted.

Issues like climate change and gay marriage were seen to be an affront to the Bible. The Republicans campaigned hard against Obamacare. Immigration was a highly emotive issue in Trump's constituency. He traded on a ticket of fear of "the other" – a stereotype of a "Muslim terrorist", "black criminal" or a "Mexican rapist". This is not unique to the United States with a global shift towards nationalist, right-wing societies.

Americans literally want to wall themselves in.

But yes, we in the media did make too many assumptions and believed the noise in our echo chambers. America is hard to figure out. I do not understand why Latinos voted for Trump when he sees them as criminals and inferior. I do not know why they would give him the power to profile them and treat them as intruders in their own country.

Trump and a large proportion of his constituency do not believe black lives matter. Yet Vonda, an African-American woman from Alabama, told me she would be voting for Trump because she could not support a candidate who murdered babies. An African-American taxi driver said he did not want his country to be engaged in any more wars and therefore could not vote for a "warmonger". "This is more than what is skin deep, sister," he told me.

The sanctity of life was an issue wholly underestimated by the Clinton campaign and she suffered heavy losses as a result of the strong stance adopted by religious fundamentalists against abortion. A Catholic priest laid an aborted foetus on the altar in his church and posted a video on Facebook of this which read: "We have to decide if we will allow this child killing to continue in America or not. Hillary Clinton and the Democratic platform says yes, let the child-killing continue (and you pay for it); Donald Trump and the Republican platform says no, the child should be protected."

As a practising Catholic, I feel utter horror that this priest violated Canon Law and a sacred space to perform a political stunt. I feel ashamed of how my church aided and abetted Trump in being elected, and excused all his offensive behaviour. I find it sickening that many American Catholics positioned themselves on the same side as the KKK and see nothing wrong with that.

The claim that Trump upholds Christian values is rubbish. He bigotry and abusive behaviour towards women is the antithesis to all sense of human decency. His entire campaign was built on lies.

The next four years of the Trump presidency will be testing times for our planet. His vision for his country, plans for dealing with terrorism and his foreign policy outlook all signal turbulence and global insecurity. It will be a challenging time for the media as Trump and his supporters are hostile to the entire industry, which ironically helped carry him to where he is now.

In two months, Trump will succeed Barack Obama as President of the United States and take his place in this iconic city where giants of history tread before him. Just like they did when they walked onto that stage in Chicago in 2008, the Obamas will leave with dignity and respect. Many of us around the world are grateful to have lived through a time when America had its first black president who did humanity, not just black people, proud.

When Obama came to South Africa in December 2013 to help us bid farewell to our first black president, he said the following: "Over 30 years ago, while still a student, I learnt of Nelson Mandela and the struggles taking place in this beautiful land, and it stirred something in me. It woke me up to my responsibilities to others and to myself, and it set me on an improbable journey that finds me here today. And while I will always fall short of Madiba's example, he makes me want to be a better man. He speaks to what's best inside us."

It is now time for the worst inside us to triumph. Donald Trump brought out the worst in his country and will do the same to the world. For the unknowing nine-year-old girl who will grow up in a country of hate and for all of us who will witness the rise of a new axis of evil, the future is a dangerous and terrifying place. DM

Ranjeni Munusamy is participating in a 2016 US General Elections Embed programme administered by the International Centre for Journalists (ICFJ) and sponsored by the US State Department's Foreign Press Centres and US Embassy Posts.

Photo: Supporters of Donald Trump cheer on Pennsylvania Avenue outside the White House, just before midnight at the end of election day, in Washington, DC, USA, 08 November 2016. EPA/MICHAEL REYNOLDS