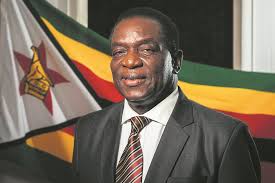 Supporters of Zanu-PF celebrate the results of Zimbabwe's election, in Harare in the early hours of August 3 2018, after the Zimbabwe Electoral Commission declared Emmerson Mnangagwa the winner of the presidential poll. Picture: AFP

"I do hereby declare that the votes by [Mnangagwa] are more than half the number cast in the presidential election. [Mnangagwa] is, therefore, duly declared as elected president of the Republic of Zimbabwe with effect from August 3, 2018," Chigumba said.

If neither candidate had won more than 50% in the presidential poll, a run-off would have been held in September.

“Though we may have been divided at the polls, we are united in our dreams. This is a new beginning,” Mnangagwa said on Twitter after the announcement.

Mnangagwa and Zanu-PF's victories were overshadowed by deadly protests, opposition allegations of rigging and criticism by observers that the contest was flawed.

Before the final announcement, MDC Alliance chairman Morgan Komichi said the results were "fake", claiming that election chiefs had not yet verified the results. Security then escorted him from the stage.

The ruling Zanu-PF was also confirmed to have clinched the majority in the country’s parliament.

In the order they were announced by the ZEC, the number of votes received by Mnangagwa and Chamisa, per province, were:

Police obtained a search warrant to look for grenades, firearms, ammunition, computers and stones at the MDC headquarters, and arrested 18 people.

They also secured warrants to search Chamisa’s residence and those of several other opposition leaders.

On Wednesday, six people were killed by soldiers sent in to break up demonstrations claiming the election was rigged.

While the government warned that further protests would not be tolerated, Mnangagwa also said on Twitter that he wanted an independent investigation into the killings, and that he sought to settle differences “peacefully”.

“It matters little whether this heavy-handed response came on Mnangagwa’s orders,” McKee said in e-mailed comments.

“Evidence that the president lacks the authority to control the security forces will be just as damning in terms of the impact on Zimbabwe’s international rehabilitation. Risks related to military involvement in politics and the quality and responsiveness of political institutions will remain a concern in Zimbabwe.”