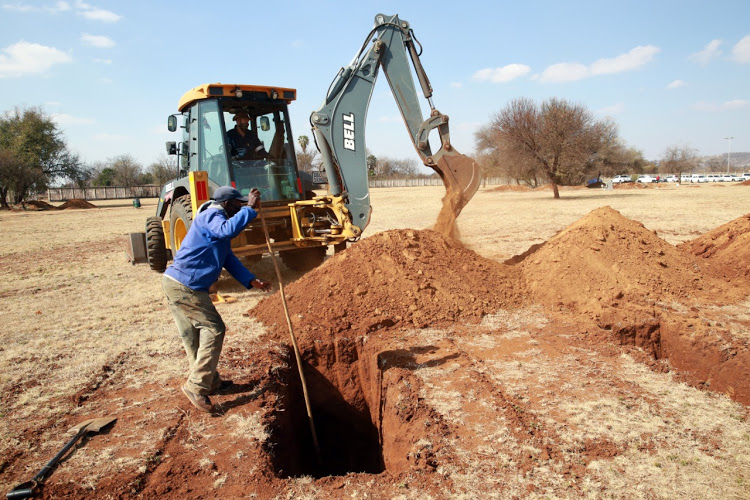 PROVINCE WAS NOT DIGGING UP GRAVES BUT PREPARING GRAVESITES

Sifiso Zulu | about 2 hours ago

JOHANNESBURG – Gauteng health MEC Bandile Masuku said that the province was not digging up graves but preparing gravesites as a standard response to the COVID-19 pandemic.

Masuku on Wednesday announced that the province was preparing over 1.5 million gravesites as the surge of cases was expected to increase rapidly. The latest statistics from the Health Department showed that Gauteng accounted for more than 75,000 of South Africa's 224,000 infections.

Masuku said that the coronavirus modelling predicted that there would be more than 1,000 deaths across the province. "We are not digging graves; we are preparing gravesites which is part of the response plans. Part of the response you should be talking to the storage of corpses – in terms of the capacity at mortuaries, and you have to talk about gravesites in terms of what is available."

Download the EWN app to your iOS or Android device.

'Did we just dig like 952,000 too many graves?': Mzansi reacts to those Covid graves

Grave diggers seen working during an on-site visit by Dr Bandile Masuku, MEC of health in Gauteng, to the Honingnestkrans cemetery in Tshwane where Covid-19 burials will take place as and when required.

First there was panic.

1.5 million Covid-19 grave sites being dug in Gauteng? Nah! Sifting through the confusion

Graves for mass burials in Gauteng are not in anticipation of Covid-19 deaths, but for any deaths

1.5 million grave sites to be exact.

WE HAVE NOT DUG ONE MILLION OPEN GRAVES, GAUTENG HEALTH CLARIFIES

PRETORIA - The Gauteng Department of Health on Thursday clarified that there were no million graves already dug in the province in anticipation of more deaths in relation to the rising number of Covid-19 infections.

“The province does not have over a million already open dug graves. The 'over a million graves' refers to the collective capacity municipalities can take,” said Kwara Kekana, spokesperson for Gauteng Health MEC Dr Bandile Masuku.

Kekana said Masuku visited one of the gravesites in Tshwane on Wednesday.

“The gravesite visited has a capacity of about 24,000. The Gauteng Department of Health is continuing to improve and increase both the infrastructure and human resource capacity of the health system to deal with the increasing pressure from the Covid-19 pandemic,” she said.

“We understand that the subject of death is an uncomfortable matter to engage in; however, ensuring that there is adequate burial space in the province, unfortunately, forms part of the reality government must contend with in the battle against Covid-19.”

On Wednesday, Health Minister Zweli Mkhize told MPs that the long-feared Covid-19 surge had arrived in South Africa and warned that it would see Gauteng and the Eastern Cape run out of hospital beds to accommodate patients within four weeks.

"We have now reached the surge… the storm we have consistently warned South Africa about, has now arrived," Mkhize told a sitting of the National Assembly.

The minister added that with confirmed cases at 215,855 and deaths at 3,502, the pandemic was touching the lives of all South Africans.

"We are now at a point where it’s our fathers, mothers, brothers, sisters, close friends and comrades who are infected," he said.

"This pandemic that is attacking us globally will cause some of us lifetime scars. It steals from us, from some lives, others jobs, others businesses. It spares no race, no gender or social class."

In Gauteng, provincial health authorities announced on Thursday that six officials in the Gauteng Health Department’s war room had tested positive for Covid-19 as the number of new infections in the province continues to rise significantly.

“The Gauteng Department of Health wishes to confirm that six members of the Gauteng health Covid-19 war room have tested positive for Covid-19. Among those positive includes the head of the department, Prof. Mkhululi Lukhele. All the colleagues are doing well and are self-isolating at home,” said Kekana.

Cape Town - Health Minister Zweli Mkhize says the Covid-19 storm that South Africans have been warned about is about to arrive and signalled the reality some may not bury their loved ones.

Delivering his executive statement in the National Assembly, Mkhize said the country was experiencing a surge in coronavirus infections.

“The storm that we have consistently warned South Africans about is now arriving,” he said.

Mkhize said the pandemic was no longer about announcing confirmed numbers.

“We are now at a point where it’s our fathers, mothers, brothers, sisters, close friends and comrades that are infected. As a country, and for the world at large, we are now in this reality where we must live with knowing that some of us cannot even bury our loved ones because of restrictions or even because we ourselves have been exposed.”

Mkhize urged all as they battled the pandemic to change their behaviour and observe all measures announced to contain the spread of the virus.

He said the nation had every reason to be united against Covid-19.

“We dare not be divided. As the government, we said we cannot fight the Covid-19 enemy alone. We need all political parties, social partners and every citizen to come on board,” he said via a virtual platform.

“The delay in the spread allowed us to achieve what we could not have achieved as a country had we continued along the normal course.”

Tests conducted showed the Western Cape, Eastern Cape, KwaZulu-Natal and Gauteng accounted for 82% of cases up to July 6.

“The overall percentage testing positive was 11.8%,” he said.

“We, however, expect Gauteng to have the highest number of confirmed cases, thus making it the epicentre,” he said.

He also said 139 quarantine facilities with 12 532 patients were activated across the country as of Monday. More than 20 million people were screened and 302 713 were referred for testing.

Mkhize revealed that 4 821 health-care workers were reported to have been infected with the coronavirus as of June 30.

“The Western Cape continues to account for the majority (68%) of infected health-care workers, with 3 285 infections as of June 29. The leading numbers of infections are among nurses, with 2 473 infections, followed by other health professionals, including community health workers, reporting 1 971 and doctors recording 377.”

Mkhize said the Solidarity Fund had indicated its willingness to support the immediate distribution of personal protection equipment (PPE) in its possession to various provinces.

“This will greatly assist us in closing gaps in provinces where there are stockouts on some PPE items.”

He, however, said they had sufficient PPE stock available to meet the requirements of front-line health-care workers.

“We endeavour to ensure that the appropriate PPE is made available to protect front-line health-care workers from getting infected by the coronavirus,” Mkhize said.

Mkhize said since the last scientific modelling results in May, the modelling had been updated to project bed capacity, which was still expected to be breached.

“Bed capacity is expected to be breached in the next four weeks.”

Mkhize said his department had developed, and was implementing, a surge strategy in anticipation of the peak.

“This will ensure increased capacity for Covid-19 while at the same time continuing to deliver other health services to the health-care users.

“During this process the department re-purposed a total of 27 467 beds for Covid-19, which has increased to 40 309 as the provinces started to experience sudden increases in the number of cases.”

Responding to the speech, DA MP Siviwe Gwarube said the government’s strategy to fight the pandemic should be grounded in concrete plans, which would force the curve of the infections down.

“This begins with proper resourcing of the health responses in order to ensure that provinces are ready to handle the rising numbers of infections,” Gwarube said.

She said the government should place the Eastern Cape Health Department under administration.

EFF MP Omphi Maotwe said the pandemic had "exposed the country to the type of leadership in the government". She said although infections were averaging 10 000 a day, the government still claimed the peak had not been reached.