WHAT NEXT IN LIBYA? 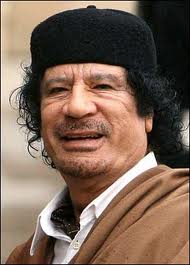 So far, weeks of conflict produced more stalemate than resolution, policy disagreement among NATO partners, and hawkish US broadsheets like The New York Times and Washington Post calling for escalated conflict to oust Gaddafi.

In its April 14 editorial headlined, "Stop the Blame Game," The Times called for stepped up bombing, arming so-called rebels, and saying, "No political settlement in which the dictator remains in place will work. The West and its partners must be ready to maintain political, economic and military pressure until (he's) gone."

"THE CONTRADICTIONS at the heart of US policy in Libya are becoming more acute." On the one hand, Obama, France's Sarkozy, and Britain's Cameron said bombing will continue until Gaddafi's gone. On the other, Obama "acknowledged that the war between rebels and (Gaddafi's forces) is stalemated."

If he's "lucky," Gaddafi "will be betrayed and overthrown by his followers or somehow induced to step down voluntarily. We can only hope that the NATO alliance does not collapse between between now and then."

Never explaining a just cause for war (perhaps because there is none), The Times, WP, and most other major media sources want a major escalated conflict, no matter the horrific death, injury and destructive toll, including environmentally by irradiating Libya with depleted uranium bombs, missiles, shells, and high-caliber bullets, mostly killing civilians but harming everyone.

On April 15, Immanuel Wallerstein headlined his latest commentary, "The Middle East: Allies in Disarray," explaining the discord among allies and other nations, including Britain, France, Germany, Russia, China, India and Brazil, as well as Israel, Saudi Arabia, and Pakistan on other issues. "It seems almost no one agrees with or follows the lead of the United States."

America may retain global giant status, says Wallerstein, but it's "a lumbering giant, uncertain of where it is going or how to get there."

For years, he's said America is in long-term decline. Its "measure," he now believes, "is the degree to which its erstwhile closest allies are ready both to defy its wishes and to say so publicly." It's also "the degree to which it does not feel able to state publicly what it is doing, and to insist that all is really under control." The consequence, Wallerstein thinks, is "more global anarchy," but who'll gain or lose most going forward "is a very open question."

Perhaps with less belligerence, America would retain better relations with allies, especially non-belligerent ones, using their resources productively for commerce and development, not conflict.

However, the more Washington spends on militarism, the faster it frays ties with allies and trading partners, accelerating its decline as other noted analysts besides Wallerstein believe. Eventually, perhaps all its influence will erode, especially for attacking non-belligerents for entirely unwarranted reasons.

A previous article explained that, in 2003, Gaddafi came in from the cold, became a valued Western ally, had meetings and discussions with top officials like UK Prime Ministers Tony Blair and Gordon Brown, France's Nicolas Sarkozy, Italy's Silvio Berlusconi, US Secretary of State Condoleezza Rice, and others. He also participated in the 2009 G-8 Summit in L-Aquila, Italy as Chairman of the African Union. At the time, he met and shook hands with Obama.

On May 16, 2006, Washington restored full diplomatic ties, removing Libya from its state sponsors of terrorism list. At the time, Rice called the move:

"tangible results that flow from the historic decisions taken by Libya's leadership in 2003 to renounce terrorism and to abandon its weapons of mass destruction programs....Libya is an important model as nations around the world press for changes in behavior by the Iranian and North Korean regimes."

She also praised Gaddafi's "excellent cooperation" in fighting terrorism. Moreover, he opened Libya's markets to Western interests, arranged deals with Big Oil, notably BP, ExxonMobil, Royal Dutch Shell, Occidental, France's Total, Italy's Eni Gas, among others. By all appearances, he joined the club, so why turn on him now?

He came around, but not entirely. Washington wants total subservience, useful puppets saluting when given orders. Gaddafi's "transgressions" include refusing to join AFRICOM, America's newest command for total control of the continent and Mediterranean Basin. All African countries participate except Sudan (now balkanized), Zimbabwe (an outlier), Ivory Coast (after regime change), Eritrea (likely on the hit list), and Libya, heading for conquest, colonization, and control of its wealth and resources, including perhaps its unreported most important ones.

An earlier article explained, accessed through the following link:

Besides its better known resources, profiteers covet Libya's ocean-sized aquifer, the world's largest fossil water system with enough of it to last 1,000 years at 2007 consumption levels. Oil is replaceable, not fresh water, making it all the more valuable, especially in private hands to sell at inflated prices, shutting out low-income Libyans from their source of life and sustenance, including for irrigation.

Money control is another issue as financial writer Ellen Brown explained in her article suggesting Libya's more about banking than oil. Controlling its money, that is, under a privatized central bank, (the newly formed Central Bank of Benghazi), replacing the state-owned Central Bank of Libya, creating its own money interest free for productive economic growth, not profits and bonuses for vulture bankers.

Money control alone got Gaddafi targeted for removal, Washington and key co-belligerents choosing their time to do it, a process now ongoing as a Washington-led NATO imperial exercise.

On April 15, a joint letter from key co-belligerents America, Britain and France affirmed escalated war until Gaddafi's gone, masquerading as "humanitarian intervention." Saying it's "impossible to imagine a future for Libya with (him) in power," it dismissed alternative outcomes as "betrayal."

Frayed relations aside, expanded Washington-led imperialism may leave Obama as vulnerable as Sarkozy, his latest approval rating at record lows and sinking.

On April 11, France 24 International News said one year before 2012 presidential and legislative elections, he "stands at a mere 20%." His party is split over his imperial policy in Libya and Ivory Coast, instead of focusing state resources on domestic needs during the current economic crisis.

Perhaps Obama's turn is next, handing trillions of dollars to Wall Street and spending more on militarism and imperial wars than the rest of the world combined, while slashing desperately needed social spending when it's most needed. Eventually voters will react when their pain threshold is reached and surpassed, creating a new battleground at home for change.

With Americans neglected in time of crisis, imagine an anyone but Obama campaign in 2012, a scenario another war won't change when majorities want current ones ended to devote more attention domestically.

As despots go, he's not all bad. Under his 1999 Decision No. 111, all Libyans get free healthcare, education, training, rehabilitation, housing assistance, disability and old-age benefits, interest-free state loans, subsidies to study abroad and for couples when they marry, and practically free gasoline. Moreover, Libya's hospitals and private clinics are some of the region's best.

Overall, though affected by poverty and unemployment like elsewhere, Libyans achieved the highest African standard of living because Gaddafi used oil revenues for economic development. According to "Qaddafi and the Libyan Revolution:"

"The young people are well dressed, well fed and well educated....Every Libyan gets free, and often excellent, education, medical and health services. New colleges and hospitals are impressive by any international standard. All Libyans have a house or a flat, a car, and most have televisions" and other conveniences. "Compared with most citizens of Third World countries, and with many (others), Libyans have it very good indeed," including decent housing or a rent-free apartment.

Gaddafi's Green Book, in fact, states, "The house is a basic need of both the individual and the family, therefore it should not be owned by others." It also covers other socially beneficial policies and says:

-- In a socialist society no person may own a private means of transportation for the purpose of renting to others, because this represents controlling the needs of others.

-- The democratic system is a cohesive structure whose foundation stones are firmly laid above the other (through People's Conferences and Committees). There is absolutely no conception of democratic society other than this.

Under him, Libyans get impressive social benefits. Also free use of land for agriculture to foster self-sufficiency in food production. Moreover, all basic food items are subsidized and sold through a network of "people's shops."

In addition, since the 1960s, women had the right to vote and participate politically. They can also own and sell property independently of their husbands. Under the December 1969 Constitutional Proclamation Clause 5, they have equal status with men, including for education and employment, even though men have a leading role in society.

On January 4, 2011, its "Report of the Working Group on the Universal Periodic Review: Libya Arab Jamahiriya" said Gaddafi's government protected "not only political rights, but also economic, educational, social and cultural rights." It also praised his treatment of religious minorities, and "human rights training" of its security forces.

Had Washington and NATO not intervened, it would have been overwhelmingly approved. Now it's postponed, pending conflict resolution that either way may require reassessing internal conditions in a country deeply scared by imperial war.

In his new book, "The Face of Imperialism," Michal Parenti defines it as:

"(T)he process whereby the dominant investor interests in one country bring to bear military and financial power upon another country in order to expropriate the land, labor, capital, natural resources, commerce, and markets of that other country. In short, empires do not just pursue power for power's sake. There are real material interests at stake, fortunes to be made many times over....The intervention is intended to enrich the investors and keep the world safe for them."

Libya is a Washington-led NATO project for greater regional dominance, the rights and welfare of its citizens to be sacrificed for the interests of capital. It's how the dirty game always works but never gets explained frankly, truthfully and openly so people everywhere know who wins, who loses and why.