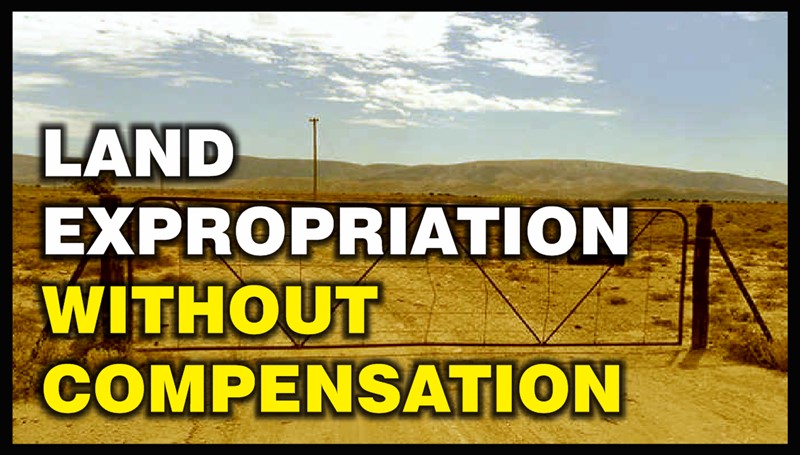 Hieronder volg n opinie wat die rondte doen op "whatsapp" oor die onwettige gryp van grond sonder vergoeding. Die redaksie het dit goed gedink om die reaksie te plaas en sodoende n breër perspektief op die onwettige handelinge van die ANC regering te plaas.....
Response written by Mark Philip Malcolm Horn - London Barrister.
* No one does business with a thief, and no one extends credit to a thief.
"You can not have land expropriation without compensation. It is illegal in international law. It is contrary to a dozen treaties that South Africa has signed and ratified. As such, it is a principle that is also enshrined in South African domestic law. You can not change the Constitution therefore to make it legal - Treaty law is superior law, it always applies.
The proposal, if directed at land held by the white community, would also contravene half a dozen international treaties, notably those condemning apartheid, that South Africa since the ANC took power, has signed and ratified.
The same argument applies above, but now with the ironic twist that any such initiative would result in the ANC being condemned under international law for actions that the world would condemn as being racist.
So no, it can not be done. When Mugabe tried this, the point was litigated. These were the legal conclusions. Now, Mugabe pushed ahead, so what happened?
Well, the claims for illegal expropriation still are valid in law - at some point the Zimbabwean Government will need to pay them.
The consequence of their illegal policy is not forgotten with time. If they ever want to be re-integrated into the global community, they will need to pay.
As to the consequences of such a policy - Zimbabwe is a good example. There are no sanction on Zimbabwe. That is a myth. The only sanctions are those targeted on Mugabe and a few of his associates, and they are in place because of human rights abuses.
The economy has crashed, there is a 90% unemployment rate, for the very simple fact that Zimbabwe has shown itself to be a thief. No one does business with a thief, and no one extends credit to a thief.
You can not run a modern economy without access to the international market, and for that you need credit. The Zimbabwean economy has declined by 70% from what it was at independence simply because no one does business with a thief.
So what would be the consequence of a policy of expropriation without compensation in South Africa? Well, as noted, such a policy would be illegal.
The international community will immediately take note that South Africa has become a rogue state. That is not too much to worry, about, its just political. There are plenty of rogue states around the world.
What would happen, however, in terms of South Africa's access to the international markets is of far more concern. South Africa would have signaled that property rights are insecure. That will mean that international investment in South Africa would come to a screeching halt.
This has been happening for many years in any event - that is why South Africa is now ranked no. 7 in gold mining, when it used to be no. 1.
It is why South Africa has a 27% unemployment rate, and a 50% youth unemployment rate. So the response could well be: "who cares, we do not need their investment". That may well indeed be true.
But, that is not where the real crisis occurs. South Africa needs access to international financial markets because it has a trade and budget deficit. It needs access to international financial markets to pay for its bloated public sector, and to pay social grants to all those unemployed people.
To raise that money, it needs the banks. Now this is where the consequences of a policy of expropriation without compensation hits home.
Banks have, as is the nature of banking, highly leveraged Balance Sheets. They lend as multiples of the assets they actually have. They need to conform with the Basel ratio's. If they have a rise in bad debt, they can easily wipe out their Balance Sheets - they then become bankrupt, and they collapse.
So what do you think will happen if land is expropriated without compensation to the Banks? The answer is, they will see a rise in bad debt, and they will collapse.
That is not the end of the story. South Africa has seen its black population rise from approximately 2.5 m in the mid 19th century, to its current level of 50 m. The 2.5 m may be taken as the sustainable level of the black population without the benefits of colonialism, and of modern agriculture.
That 2.5 m number is important, because only 13% of South Africa is suited for agriculture, and only 3% is high quality agricultural land. The vast majority of South African agricultural land requires the application of modern technology.
Farming in South Africa is highly capital intensive. Farmers depend on bank lending not only to buy their farms, but also to provide essential working capital.
So, what happens if the land is expropriated without compensation, if the banks then collapse? Well it means no one is able to provide the essential working capital. If the farms then collapse, then up to 95% of the existing black population is at risk of starvation.
The banks can not access international markets, international lenders will not lend, South Africa then descends into chaos. At point, the international community would probably intervene military to restore order. As such, South Africa would have become yet another Failed State in the traditional African mold."
Vorige Volgende
Kategorie: Afrikaner