“Our suspension has to do with tribalism because we are Zulus. 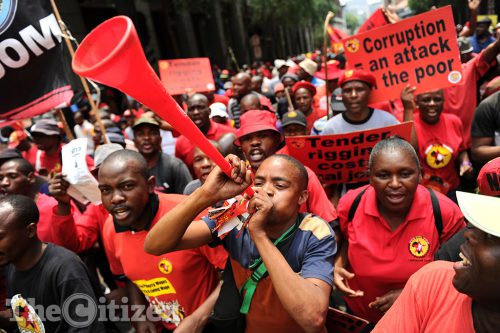 This follows the disbandment of a local branch for allegedly differing with the national leadership.

The National Union of Metalworkers of SA (Numsa) has been rocked by a tribal fight that is threatening to tear the union apart ahead of its national congress next month.

The first signs of internal war within Numsa emerged on Tuesday after the union’s local branch in Alberton, Ekurhuleni, was disbanded by the regional executive committee – apparently for differing from the national leadership this week.

It also follows the suspension of branch chairperson Thomas Langa and secretary Nkonkhelo Mncwango respectively amid allegations of corruption. The pair were suspended in July.

A group of disgruntled Numsa members from the union’s local branch in Alberton are planning to march to Numsa’s headquarters in Johannesburg on Fridato demand that the union’s national leadership resolve the tribalism crisis.

Ekurhuleni is one of Numsa’s biggest regions, with about 48 000 members. on Wednesday, Langa launched a scathing attack on Numsa Ekurhuleni regional secretary Jacob Xilongo, accusing him of tribalism.

“Our suspension has to do with tribalism because we are Zulus.

“We were suspended because we have been vocal about what is happening within Numsa.”

Langa said they were not even given a chance to explain why they should not be suspended. “We were not given the charge sheet,” Langa said.

“Our constitution says you must lodge an appeal with office of the general secretary.

“We followed the constitution but our matter was not resolved.”

Langa said Numsa has become a law unto itself. “In the past when we had this kind of issues, we would escalate them to Cosatu,” he said.

He said they tried to lobby other Cosatu affiliates to assist them. “They said they would not help us because Numsa is no longer part of Cosatu,” Langa said.

Langa said there were also discussions for Numsa to return to trade union federation Cosatu after the union was expelled in 2014.

Numsa is a staunch backer of former Cosatu boss Zwelinzima Vavi and a strong critic of President Jacob Zuma’s administration. Langa said their suspension has to do with the internal politics of the union.

“The way I understand their issues it has nothing to do with me,” Jim said.

“The local branch was disbanded by the region in the form of the regional executive committee.”

Xilongo described as “nonsense” claims of tribalism. “Tribalism and ethnicity has no place in our union,” he said.

“What has led to their suspension has do with donation of monies.”

Xilongo said Numsa local branch in Alberton was disbanded because it was not functioning properly.

The Citizen has learnt that Numsa’s national congress is at the heart of factional tensions.