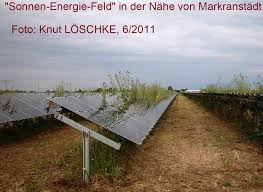 The sun is setting on solar power, the money’s gone and nobody’s asking any questions.

If you keep an eye on the financial world, which I do, and especially the green sectors, which I also do, it’s been an interesting time of late. Within the last few weeks, Solar Trust of America (STA), owner of the world’s largest solar plant, filed for bankruptcy protection under Chapter 11, and nobody expects much of it, if anything, to emerge from it. STA joins a long list of companies in the solar energy sector, who’ve gone bankrupt, ducked into protection from their creditors, suspended production indefinitely or are simply circling the plughole.

Across the world, a few of the more prominent and expensive casualties are Solyndra, Solar Millennium AG, Energy Conversion Devices Inc, Q-Cells, Solon, Solar Millenium, Solarhybrid, Ener1, Range Fuels, Beacon Power Corp and there’s a whole lot of others. In case you haven’t noticed, it’s probably not a good idea to invest your hard-earned pennies in any company with “solar” in its name. It’s almost as bad a mistake as thinking you had some sort of long-term future employment with one of them.

Nearly all of these companies were the beneficiaries of huge government startup grants or loan guarantees. The products they made were effectively sold to consumers with a subsidy, to make them more attractive. The customers also had the benefit of some generous feed-in tariff schemes. All that money that was sunk into them has now gone and the specific green industry sector it was expected to create, is pretty much moribund.

In Germany, which gets the same amount of sunshine as the US state of Alaska and where inexplicably nearly half the solar power output of the world was installed, investment experts expect not a single solar cell company to be in business in five years time, since not one of them is currently showing an operating profit, nor is expected to do so in the foreseeable future. In Germany alone, the government have to date handed out about €100 billion in subsidies to renewable energy and even there, the most fervently green country in Europe, they’ve begun to have some serious doubts. It’s a money pit. The promised green jobs haven’t appeared and unemployment in the developed nations continues to rise. On a world-wide basis, the money wasted runs into the billions of dollars.

Billions and billions and we’ve ended up with pretty much nothing. Actually, that’s not quite correct. What we will have, within a decade or two, is a clear up job that’ll make Chernobyl look like a training day. As the vast arrays of panels age, they’ll crack and contaminate the topsoil with poisonous chemical particles. Take a careful look at the picture below, because that’s what we’ll have to pay to detoxify, and make no mistake, we’ll be the ones paying, despite a few of the companies installing these panels having given undertakings to dispose of the panels at the end of their service life. The hard-nosed investor in me reckons they’ll be safely bankrupt by the time any such expensive undertakings have to be honoured.

I wonder where we will store all that contaminated topsoil? Perhaps wherever we’d planned to store nuclear waste, before we decided not to build any more nuclear plants. 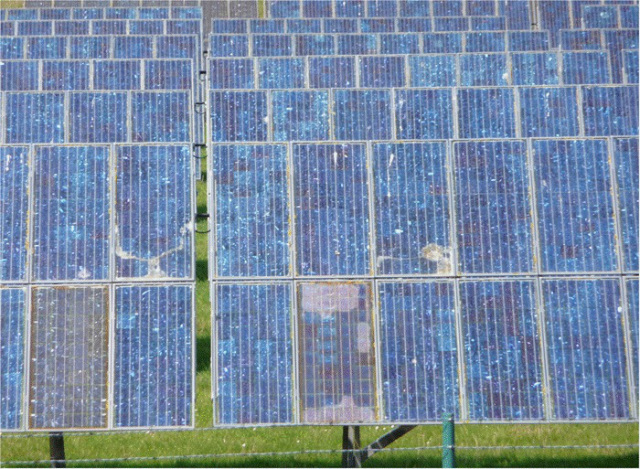 Why are they going bust? The usual reasons given are that there’s too many companies in the solar energy industry and that subsidies are being cut by the governments. Let’s take a hard financial look at these excuses.

Too many companies chasing the same buck. All of them were in receipt of government grants and loan guarantees. Solyndra alone cost the US government 500 million USD in loan guarantees and it looks like the blood-letting over STA could reach 2 billion USD. Even in the loony world of state funding of renewables, I would expect an application, with an attached business case, was submitted to the relevant department handing out the taxpayer’s money. At the time, it should have been blindingly obvious that there simply wasn’t enough business for them all. That’s the first basic question you ask when considering any development loan request from a company.

It was the classic stampede of new startup companies rushing in to fill a new business sector, followed by the inevitable shakeout, the only difference being that it’s not the minnows going bust. Who exactly approved the applications? Why on earth did they? Has anyone gone back and reviewed the veracity of the statements made in the original applications? Is there anyone, anywhere, seriously looking into where the money went?

As far as I’m aware, in any substantial sense, the answer to all those questions is no.

Subsides being cut; that’s true but then, they were never supposed to last forever. They were part of larger stimulus packages, which were only supposed to get those businesses up and running. If the business proposals and revenue projections were correct, all those companies should have been running profitably by now. They patently weren’t, so pretty much the same questions arise and with the same answer – nobody is asking any questions.

The business case for the whole industry was supported by numerous studies by scientists, academia, so-called industry experts and advocates of renewable energy, all of whom said it was the clean and profitable future of energy production. Obviously, all those studies were seriously wrong and ended up costing governments billions. Has anyone got back to these “experts” and asked why the studies and their financial models were all so bad? Given how shoddy their expert advice has proven to be, is anyone asking for the money back, which we paid for this supposed expertise? In the light of how bad expert advice in this area has been, is anyone reviewing advice for similar green sectors, such as wind power? Anyone? Anywhere?

Never in the history of the world, has such an amount of money been wasted, without any trace of financial oversight or accountability. Not only has the money been squandered, but at a time of high unemployment, the fashionable rush to create illusory green jobs, has actually destroyed jobs in the real economy. A study in Spain concluded that for every green job created by their massive renewables investment, the real economy lost 2.2 real jobs and only one in ten of those green jobs created, will be permanent. The much touted transfer of jobs from the real economy to the green economy simply never occurred either. Similar studies in Britain, Canada and Scotland have come back with equally appalling numbers. Spain was one of the early ones to dive head first into the green clean energy dream and now has an unemployment rate of 21%.

President Obama pledged a 150 billion USD investment over the next decade, to create a promised 5 million green jobs but nearly half way through that period, the number of green jobs created is so pitiful, the numbers are already being “massaged.” Apparently, if you drive a hybrid powered bus, you’re officially classified as having a green job. Bart should tell that to Otto the next time he climbs on the school bus – I think Otto will be kinda pleased about that.

Energy produced from renewables, such as solar power, is at least ten times more expensive than conventional sources, so the only way it can be afforded, is if you heap on various direct and indirect stealth taxes on those conventional sources to subsidise it.

The macroeconomic impact of the resultant rise in energy prices is on enterprise. Once the cost of energy and regulation rises to a certain price point, it’s simply a no brainer to relocate the company to a more business friendly environment, either out-of-state or out-of-country. A classic case is California, where commercial electrical rates are already 50% higher than in any other state in the Union. Because of recently enacted state legislation and the upcoming “California Global Warming Solutions Act”, it’s estimated that an additional hike in energy prices of between 19% to 74%, dependent on your location in California, will occur in the next decade.

Companies have been relocating, in whole or in part, out of California. It’s a bit like the California gold rush of 1849, but in reverse; everyone is getting the hell out of the place. In the first quarter of last year alone, one business relocater counted 70 of these “disinvestment events”, as they’re euphemistically called, and that in a state with a 10.9% unemployment rate and some very severe budgetary problems.

Another effect of this rise in energy prices, is to push more and more ordinary people into what’s now called fuel poverty and as usual, it’s the poor and low wage earners, who are taking the pain. What hard statistics I can find on the number of people now priced into this situation, are quite simply appalling.

The only country, for which I can find official national statistics on fuel poverty, is the UK but whatever country you live in, I imagine the figures might be similar, dependant on your climate and how far your government has gone down the renewable’s rabbit hole.

The UK’s Department of Energy and Climate Change’s (DECC) latest report in July 2011, which only gives figures up to 2009, estimated that 18% of UK households were then officially classified as being in fuel poverty. The UK Citizen’s Advice Bureau, again a guesstimate circa 2009, is concerned that 5.5 million people in UK face living in freezing conditions through Winter, because of self-rationing or disconnection. Given the steep jump in domestic power prices over the last three years, the figure must now be well over 25%. When it comes to any of DECC’s numbers, it’s interesting to note that they attribute the increase to several factors, but never once do they mention green taxes, which is why I view even the dire figures supplied by them with some suspicion, as being too conservative.

Mr. Cameron, here we are in the twenty-first century and in a quarter of households in the UK, the people you’re supposed to be responsible for, are having to make stark choices between food and heating as a result of your continuing policies and the policies of your predecessors. And that, in the teeth of the worst recession in living memory. I know with your background of Eton, Oxford, millionaire status and coming from a rich and privileged background, it’s perhaps difficult for you to appreciate the hardships that choices like that inflict on ordinary people.

You’ve never spent a Winter just being cold, so let me help you out and give you an idea of what it’s like. It’s pensioners, who spend most of Winter in bed for warmth, because they can no longer afford to heat their home, it’s families wearing overcoats indoors, it’s kids trying to do homework when their hands are freezing, it’s Dad’s overcoat thrown over the sleeping kids in an unheated bedroom as an extra blanket, it’s the sickly ones of all ages really suffering through Winter, it’s months of coughs and colds and chilblains, it’s the cold-related deaths that never should have happened and it’s just basically plain miserable. As usual, the biggest proportion of people in poverty, fuel or otherwise, are always the children. Are you starting to get some sort of idea of what it’s like outside the slick and well-heated political circles of London?

You could at least take your foot off the green taxation pedal and help them out but you won’t though, will you? Saving the planet is simply too important to ever contemplate doing anything like that. Quite frankly, as the Prime Minister of the United Kingdom, you’re a bloody disgrace.

Governments wasting vast amounts of taxpayer’s money on financially absurd projects is always bad but if the net effect of doing so, is to impoverish and harm their own most vulnerable citizens, then it’s unforgivable.