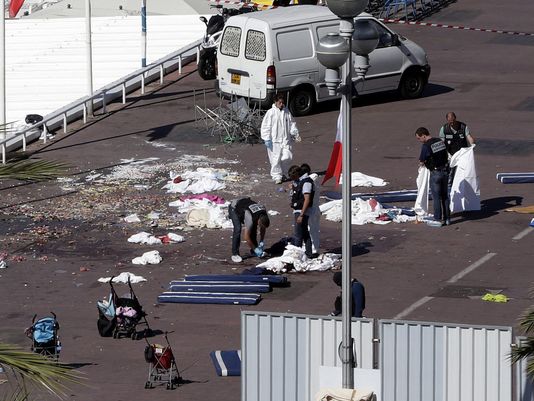 Deadly truck attack in Nice: What we know

Still photographs show forensic investigators examining the truck that plowed through a crowd in Nice, France, killing at least 84 people. The Paris prosecutor's office is investigating whether any organized groups are linked to the mass killing. (July 15) AP 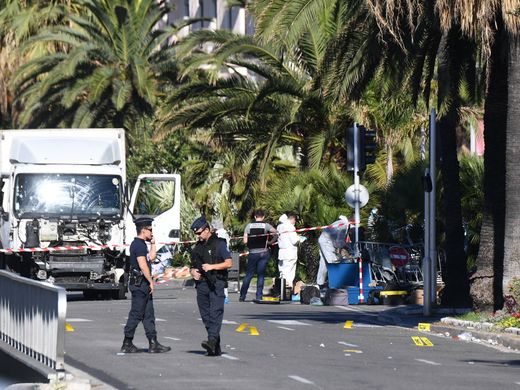 Another terrorist attack hit France as a truck plowed into a crowd watching Bastille Day festivities in Nice on Thursday, killing at least 84 people and injuring 50 others, French officials said.

French authorities are still gathering information about the horrific incident. Multiple witnesses and officials described the chaotic scene in detail as people were celebrating the festive holiday in French Riviera.

Here's what we know at the moment:

A truck smashed through bystanders near the iconic Promenade des Anglais in Nice. People were observing Bastille Day: the anniversary of a mob storming a looming fortress that held political prisoners two days after the French Revolution in Paris started in 1789.

Video footage showed men and women — one or two pushing strollers — racing to get away from the promenade with broken bodies splayed out on the asphalt, some of them piled near one another, others bleeding out onto the roadway or twisted into unnatural shapes.

"The driver was obviously determined to crash — the truck drove onto the pavement eight feet from where we were standing," a witness told a newspaper in Nice-Matin. "I saw people fall, a small child on the ground."

"Thank God we decided not to take the young ones" to see the Bastille Day fireworks, witness Yves Lamorelle told USA TODAY. "I am the only one who went. It was completely crazy, the crowd panicked and everyone was trying to flee."

How far did the truck drive?

The truck driver plowed into the unsuspecting crowd over a distance of 2 kilometers (1.2 miles), a local official said. The driver turned onto Promenade des Anglais at about 10:30 p.m. ET, The New York Times reported. Christian Estrosi, the regional council president of the Provence Alpes Côte d’Azur, said surveillance footage showed the attacker boarded the truck “in the hills of Nice.”

Sylvie Toffin, a press officer with the local prefecture, said the truck ran over people down the sidewalk near Nice’s Palais de la Mediterranee, a building that fronts the famous seaside boulevard.

“A person jumped onto the truck to try to stop it,” Eric Ciotti, a local lawmaker, told Europe 1 radio. “It’s at that moment that the police were able to neutralize this terrorist. I won’t forget the look of this policewoman who intercepted the killer.”

How many deaths and injuries?

Who was the truck driver?

The identity of the driver was not disclosed. The French Interior Ministry issued a statement on Twitter confirming the driver of the truck was dead. “The individual who drove the truck was neutralized,” the statement added. “The investigation will determine whether he acted alone.”

Identification belonging to a French-Tunisian man was found in the truck. Officials were investigating whether the ID matched the suspect. AFP and Radio France Internationale (RFI) reported that the attacker had been formally identified, citing sources. RFI said the 31-year-old was the owner of the identity documents found in the truck, and lived in Nice. Local newspaper Nice-Matin named the suspect as Mohamed Lahouaiej Bouhlel. The attacker has not been named by the authorities.

Who are the victims?

The victims have yet to be officially named. Estrosi said more than 10 children were among the dead. Two Americans were killed in the attack, WFTV reported. It named them as Sean Copeland and his 11-year-old son Brodie. Copeland, 52, was from Austin, Texas, the Huntington Post reported. The two have not been named by authorities.

Hill Country Baseball club wrote in a Facebook post: "You are in our hearts, thoughts, and prayers. Rest in peace, Brodie and Sean, you will be remembered by many."

What was found inside the truck?

Estrosi said the truck was loaded with arms and grenades. He told BFM TV that “the driver fired on the crowd, according to the police who killed him.”

Was the incident terror-related?

It's not immediately clear at this point, though French authorities certainly feel so. France president Francois Hollande said the truck attack was of a "terrorist character."

Hollande spoke to the nation hours after the attack and extended France's state of emergency by three months. The state of emergency, originally scheduled to end July 26, was in place stemming from the January and November 2015 attacks that, together, left almost 150 people dead.

“We have to demonstrate absolute vigilance,” Hollande said in his press conference, adding, “We have to increase ... our level of protection. France as a whole is under threat of Islamic terrorism."

Hollande summoned a defense council meeting Friday with other key ministers and officials, before heading to Nice. The French leader plans to call up additional reserves to help police, particularly at French borders.

Did the attacker act alone?

Estrosi called for the investigation to focus on any accomplices, the Associated Press reported. “Attacks aren’t prepared alone. Attacks are prepared with accomplices. There is a chain of complicity. I expect it to be unveiled, discovered and kept up to date,” he said.

A link has been posted to your Facebook feed.