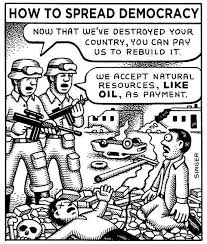 Britain's Ministry of Defence has drawn up a secret report about how to keep South Africa's ruling party in power at the next election, VICE has discovered.

Freedom of Information Requests reveal that last year, a group of military officers from Britain's Royal College of Defence Studies visited South Africa. Their assignment was to "assess the political threats to continuing ANC rule in South Africa". I sent a further FoI request, asking to see the contents of the report compiled during that trip. The request was denied. The report remains classified, with the MoD claiming that "the information contained in the report was provided in confidence and should it be released has the potential to adversely affect relations with the South African government."

The ANC, or African National Congress, has ruled South Africa since the end of Apartheid. Once the party of Nelson Mandela and the national liberation struggle, its current leader Jacob Zuma is marred by corruption allegations and accused of running a repressive security apparatus against his political opponents.

Despite the concern surrounding the ANC's activities, the military officers were required to, "devise a medium term strategy, with concrete deliverables, for the party to retain power at the next general election".

The ANC did not respond to our request for comment. The UK Ministry of Defence told VICE that this was "a purely academic exercise, strictly for internal college study purposes, designed to develop course members' skills in strategic analysis and their ability to understand others' perspectives".

However, the officers took part in numerous activities outside of a normal military role, including meetings with a UK mining company. Campaigners are alarmed at British military interest in the political and economic affairs of a foreign power.

"It is outrageous if the UK Ministry of Defence is getting involved in planning how to ensure that one particular party retains power in South Africa," said campaigner Richard Solly, co-ordinator of the London Mining Network. "It is another example of the UK government's policy of supporting British mining companies and lobbying overseas governments for favours for those companies, even when there are huge concerns about their impacts on communities, the environment and human rights."

VICE obtained the itinerary for the South Africa visit, which revealed numerous business meetings. The military officers received a briefing at the Johannesburg Stock Exchange, and called in at HSBC for a working lunch about the "economic outlook for the region". The military delegation also attended an event at the offices of controversial British platinum mining company Lonmin in Johannesburg.

The topic of discussion at Lonmin was titled: "An Insider View on the Extractive Industry& Future Prospects". They spent an afternoon with senior staff from the company, including its head of marketing and vice president of refining.

Lonmin's operation in South Africa has hit the headlines because of workers staging strikes against poor conditions. It was during one strike in 2012 at the Lonmin site in Marikana, near Johannesburg, where police opened fire, killing 34 workers and injuring 78 more. The ANC and Lonmin have close connections, with one former company director at the time of the massacre, Cyril Ramaphosa, later becoming the ANC's Deputy President and right-hand man of President Jacob Zuma.

In the run up to the massacre, Ramaphosa emailed politicians and police urging them to take tougher action against the striking miners, who he said were "plainly dastardly criminals and must be characterised as such". Ramaphosa wanted the police "to act in a more pointed way". A subsequent inquiry cleared Ramaphosa of inciting the killing, although victims' families are trying to pursue him through the courts .

"The Marikana massacre in 2012 and the recent murder of Bazooka Rhadebe are examples of British-linked mining projects in South Africa associated with appalling violence, including violence on the part of the state," Solly from the London Mining Network said. "The British government should put its efforts into supporting the workers and communities struggling to get justice from British-linked companies."

Despite international condemnation of South Africa's police for the Marikana massacre, the MoD delegation was scheduled to visit a police station in Alexandra Township for a briefing from the South African Police Service. However, the MoD claims not to have any minutes or notes from the officers' meetings with the South African police and the mining company Lonmin. In response to a Freedom of Information request, it said, "No information is held on the organisation of the Lonmin Office and Alexandra Police station elements of the visit programme."